Mancat Midnight Monday (on a Tuesday, because Huggy Bear insisted)

This would have been a Mancat Midnight Monday, except that it's Tuesday ... so I guess to a Twilight Tuesday? Uh, Huggy Bear is shaking his head, insisting it can still be a Mancat Midnight post, just on Tuesday. I asked if he wanted to wait until next Monday, but he really wants to show his pictures.

Huggy Bear had a really good photo day last week. Anyone who has tried to photograph their black cats knows what a challenge it can be. Huggy Bear makes it a little more challenging by moving a lot when Mom and Dad are trying to get his picture. 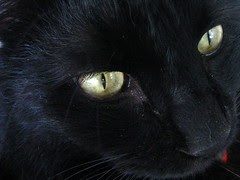 Huggy was sitting near the window, relaxing in the warm, natural light. This helped so that the picture could actually show his face. Mom is always saying what a handsome Mancat he is, but usually the pictures don't show it. 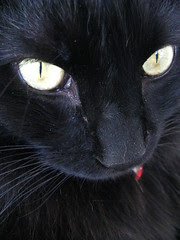 He is a very kind, playful little brother, but these pictures show his intensity, too, which you usually don't see. Of course, even at his most intense, he's still a half-second away from purring for Mom.
Posted by jenianddean at 7:03 AM