Our linen closet has been open for about a week now. The latch on the doorknob is stuck in so the door doesn't stay shut. Dad is pretty sure this is an easy fix, but he and Mom have been pretty busy lately and haven't had a chance to fix it. But don't think I'm in any kind of hurry for them to fix it. I've figured out how to pull it open (they still try to shut it so it looks normal). So I'll open it on my own and make a nice little napping spot in the towels. I think I can get used to this.
Posted by Jasper McKitten-Cat at 8:59 AM 5 comments:

We're purring for Parker today as she crosses the Bridge. She's an old friend, and we'll miss her greatly. But she has also been very ill, and is going on her own terms, and I think that is all any of us can really ask for. We'll look out for Rudy, Puff and Powder for you. Smoochies!
Posted by Jasper McKitten-Cat at 8:19 AM 6 comments:

Have you been to William's store yet? I can't wait to order from it. I'm making a wish list for Mom to shop from!
Posted by Jasper McKitten-Cat at 12:45 AM 2 comments:

We had a very wild Sunday. Earlier in the evening Mom let us in the garage. It wasn't two minutes later she glanced in the garage and called to Dad, "There's a dead lizard in the garage!" And then she shut the door with us out there. So Dad gears up with some paper towels to dispense of the dead lizard, but when he opens the door there's no lizard. "It must not have been dead," he told Mom as he stepped into the garage to investigate. Well, after my ordeal of being locked in the garage over night last week, I wasted no time busting into the house. Then Josie was right behind me. Good thing Mom was paying attention because she called for Dad, "Josie's got it in her mouth!" Josie was trying to bring the dead lizard into the house to show Mom and Dad. Well, Dad scooped her up and she put the lizard down for him in the garage. Sure enough, Josie had found a small skink and played with it until it broke. She is a very good huntress.

Here is the broken skink. You can understand why Mom didn't want this in the house. It was about four inches long minus the tail. (Dad never found the tail.)

Well, this was just the beginning of the adventures on Sunday. Later that night our friend Samantha came over to ride bikes with Mom. But Samantha was feeling guilty about not spending time with her crazy dog Louie. So Dad offered to walk Louie while they rode bikes. That was fine, I guess, if Dad wants to show some pity to a dog. But then, after the rides and walk, Mom, Dad, Samantha and Louie all went to the back deck to hang out, enjoy the nice night and talk.

I'm not sure how clear it is in this picture, but we do not approve. We disapprove like a rabbit disapproves. Josie got up against the door and whapped the door while hissing. I was very puffed up and roaming the back of the couch patrolling. Maggie was the only one who really didn't seem too concerned. I think we made it clear that dogs are not welcome on our back deck, or in our house. We were getting so agitated that Dad actually took us to the bathroom so we could calm down. When we came out later Louie was gone. Apparently he likes to be chased by cats. He thinks it's a funny game. All I have to say to Louie is this: look at that skink and consider yourself warned. (OK, he is cute, I'll give him that...)
Posted by Jasper McKitten-Cat at 11:14 AM 4 comments:

Dad is in trouble!

Last night we were playing in the garage. When Dad called us in to shut the garage door and head to bed, he didn't do a head count, and guess what -- I spent the night in the garage! Yeah, talk about feeling the love. I apparently wasn't missed at all. Sure, usually by that time of night I have settled into a spot upstairs, but that doesn't mean he gets away with not double-checking. But I did get to bug hunt, and there is a litter box out there. But I know Dad's going the be more careful from here out. On the plus side, I got a bunch of treats for my inconvenience.
Posted by Jasper McKitten-Cat at 9:48 AM 8 comments:

This is soooo Maggie! 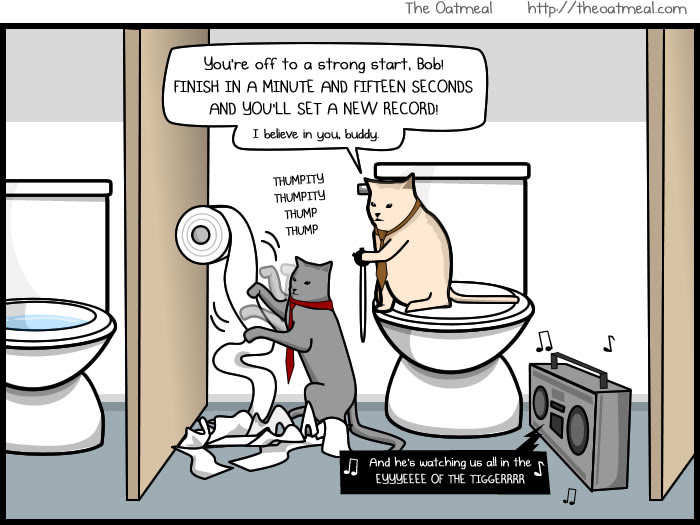 OK, this is soooo Maggie. And yes, today has been pretty unproductive, unless you count multiple blog updates as productive. (Loving the Bobcats on the Oatmeal!)

I know this comic has surely circulated a few times, but I came across it again today and felt it deserved another share. Well, while I'm at it, read this one too (although we are cats and already know most of it...) And this one is good advice for our beans... especially the bit on "love mauling."
Posted by Jasper McKitten-Cat at 12:43 PM 2 comments: 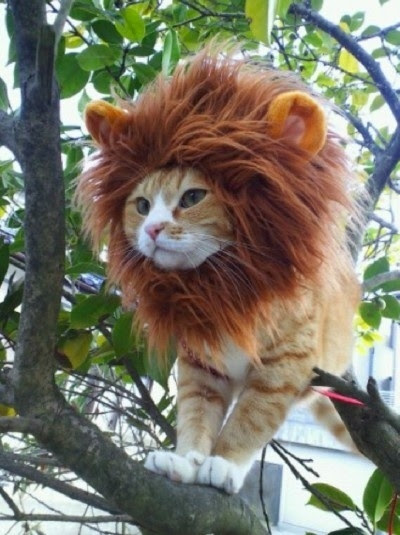 Dad is very tempted by this. I don't think so...

I hope everycat had a good Mother's Day! Maggie was particularly naughty for Mother's Day. Mom and Dad have a tall dresser that has become where they put stuff they don't want us getting into because it is tall and we don't get up there. Well, Dad forgot he left the catnip up there after re-nipping our scratchers and Maggie kept pawing at the dresser. This, of course, got her in trouble because Mom and Dad didn't want scratches on the furniture. (She didn't actually scratch it.) But then, out of nowhere, Maggie leaps straight up to the top of the dresser and starts clearing everything off. She knocked down a plastic bag for me to chew on, and Mom's new ear buds (I didn't get to chew on them). Maggie then cleared a nice spot for her and spread out to nap like Queen of the Mountain. Now that she knows she can get up there, Mom and Dad are going to have to find a new "kitten safe zone" for things, because you know we like a challenge.
Posted by Jasper McKitten-Cat at 8:38 AM 6 comments:

Has it really been a week since I updated. I know I can get slack, but it usually isn't that long. I blame Mom and Dad for being so busy. Do you know what time Dad got home from the theatre last night? 1:00 am. Seriously ... even at that hour we don't want treats. We want sleep! (OK, we always want treats...)

In the meantime, Mom and Dad were babysitting for some friends who have tee-tiny twins (eight weeks old, boy and girl) and they have two cats who are hanging out outside right now.

This is Joey (distant) and Allie (near). They are very sweet, and we're OK with them getting some love from Mom and Dad since they are currently outside and losing the attention battle with the twins.
Posted by Jasper McKitten-Cat at 6:12 PM 6 comments:

Yes, it's that time again -- theatre time. Mom runs a local theatre in town and is producing the show that opens in a week and a half. So things are getting pretty busy for Mom and Dad. Dad is even IN this show -- on stage and everything. He gets to be the angry neighbor that tells them they're being too loud. He has to use his "Huggy Bear stop scratching the chair" voice. But the busy theatre time means they have a lot of late nights like last night, where they don't eat dinner until midnight. Thank goodness for brothers and sisters to keep us entertained. But we do get extra treats when Mom and Dad get home late like that, so that's good.
Posted by Jasper McKitten-Cat at 11:21 AM 6 comments: