Dad asked the other day if we intentionally leave hairballs where he and Mom are most likely to step on them. I wanted to give him a serious answer but I was laughing too hard. Of course we do!

Storms update: We made it through all the crazy weather unscathed -- just some rain, wind and nervous cats. Thanks for your concern.
Posted by jenianddean at 12:34 AM 5 comments:

It is a very stormy day today. Fortunately, so far, we've missed the crazy sever weather that has been hitting the southern states. But today we have lightning and thunder and a tornado watch until noon -- and that has made us four very nervous cats. It's days like today that I wish Mom didn't have to work so she could stay here and keep us comforted and calm. (Who am I kidding? I wish Mom didn't have to work ever.)
Posted by jenianddean at 8:33 AM 7 comments:

Our dear friend Sweet Praline went to the Bridge Monday. We are very sad, but we know this is what was best for her. Please keep her Mom Paula in your thoughts and prayers. Praline was a good friend and companion of hers for many years. Praline, we'll see you at the Bridge one day. Until then, I know you are in good company.
Posted by jenianddean at 12:22 AM 5 comments:

Labels: Rest in peace sweet one

We are purring hard for our dear friend Sweet Praline. She's not doing well and may be going to the Bridge soon. Please keep her and her Mom Paula in your thoughts and prayers.
Posted by jenianddean at 11:31 PM 5 comments:

Dad never let us play on the treadmill. We'd probably have done what these two cats do...


I like how the white one is trying to catch and understand the treadmill but the tuxedo just wants to whap it into submission.
Posted by jenianddean at 2:12 PM 6 comments: 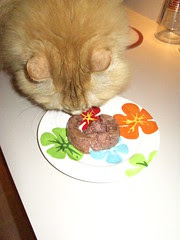 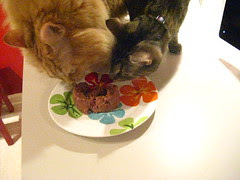 Maggie was quick to come up and try some of the cake too. Funny thing was, Maggie and Huggy Bear are usually the biggest pigs of us, but they didn't really care for this one. Josie and I liked it a lot, though.

Overall it was a good birthday. I could have taken some more Mom and Dad time, but there's really never enough Mom and Dad time. Thanks for all the birthday wishes. You all made me feel so loved and special.
Posted by jenianddean at 11:31 PM 10 comments:

Happy Birthday to me!

Today is my birthday! I can't believe I'm turning nine years old. This is my last year in single digits. Mom and Dad said we'll have a party tonight with stinky goodness cake for us. I can't wait! It really seems like just yesterday that I was being adopted by Mom and Dad. I picked them the second I saw them and made sure that they knew it. The rest is history. And now that I think about it, I've spent more than half my life as a blogging cat -- wow! Thanks for sharing all this time with me.
Posted by jenianddean at 7:14 AM 21 comments: 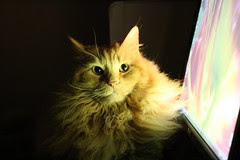 I love this video, but I don't know if I'd be as brave as this cat.
Posted by jenianddean at 7:15 PM 5 comments:

We had a little lizard adventure the other day (little lizard, and little adventure). Dad was in the living room and he could hear Maggie whapping the back kitchen window. He looked to see what she saw, and there was a lizard on the screen. Then he looked closer and realized the lizard was on the wrong side of the screen, somehow trapped between the screen and the window. 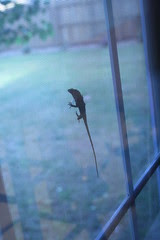 Here's the "lizard under glass." 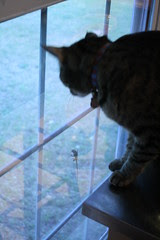 Maggie was very good about keeping an eye on things while Dad tried to decided how to handle this. 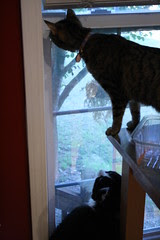 Josie did some investigating too. 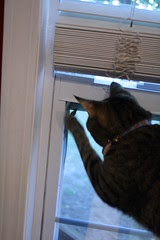 It seems the lizard tried to hide in the corner but Maggie pointed it out to Dad.

Dad went out back to check and couldn't figure out how to get the lizard free from that side. One of the clips on the screen is broken, so the lizard could have climbed up and back down the wrong side, trapping himself. The other possibility is that we were playing in the garage the other day and this window was open, too. If the lizard was really sneaky he could have made it from the garage to the window, but we would have spotted him before this weekend.

Dad eventually opened the window and tried to reach up and grab the lizard, but of course he ran up and away. So then Dad unlocked the top of the window so it could lean in a little, un-did the screen and shook the lizard free.

Maggie and Josie watched the whole thing, but never had a shot at "helping" with the lizard too much. We're glad he is safe and free, but we miss our lizard tv.
Posted by jenianddean at 12:37 PM 5 comments: 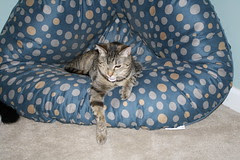 Maggie has re-discovered her tuffet. Mom thought this would be a big hit when she first found it. But we hardly paid any attention to it. That is until it got placed up in the corner to get it out of the way briefly. Now Maggie loves it -- almost too much since she's not snuggling with Mom at night as much.
Posted by jenianddean at 9:20 PM 9 comments:

New views for the blog

Did you see the new ways to view a blog on Blogger? Check out my blog in mosaic view. I think this is the best of the five views. You can go to the drop-down menu on the right in the "new view" mode and change view styles. I'll still stick to looking at the blogs in the original for the most part, but it's kind of fun to look at my own in different ways sometimes.
Posted by jenianddean at 2:23 PM 6 comments:

Have you voted for Daisy in the Best of Blogs yet? A quick registration and you're ready to vote. I think you can even vote more than once.
Posted by jenianddean at 9:34 AM 4 comments:

Making up Mom and Dad time

Mom and Dad has been so busy lately that on Sunday they spent most of the day home with us making up for lost time. I don't like when they are away doing other stuff, but I really like when they make up for it.
Posted by jenianddean at 1:55 PM 6 comments: