I may need to post a help wanted ad and hire myself a personal assistant because Mom and Dad are really falling down on the job. I can't believe my last post was over a week ago! It's not like they were on vacation. Just the opposite, I guess. They got home before 10 p.m. for the first time in three days. That not only disrupts my blogging, it real puts a cramp in my pets time too. But the week promises to get better from here, and they have a long weekend (with rain in the forecast so they can't be outside). That means more me time, and pictures on the blog. I hope your personal assistants are doing better than mine. In the meantime, I'm working on my ad. Just in case.
Posted by jenianddean at 12:02 AM 9 comments: 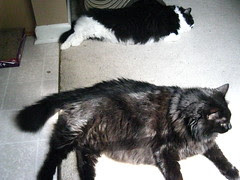 Posted by jenianddean at 7:01 AM 8 comments:

We have had some good cat TV this weekend. Mom and Dad found a baby mockingbird hopping around in the front yard. He wasn't hurt, just trying to break in his new wings. Momma and Poppa bird were watching from high places, and Momma Bird would bring Baby Bird food every now and then. Baby Bird hopped toward another yard with his wings pumping late this afternoon, so we are very hopeful that he got up and going. 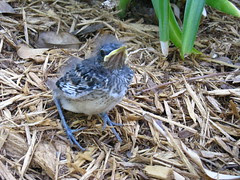 Baby Bird hanging out in the mulch near the cover of some flowers. 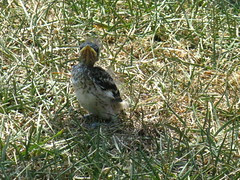 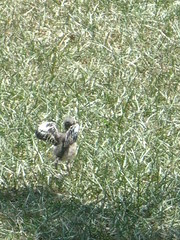 Baby Bird trying hard to get those wings working. Fly Baby, fly!
Posted by jenianddean at 12:04 AM 11 comments:

We're hoping to continue the relaxing weekend with a relaxing Sunday. We got to enjoy some much-needed Mom and Dad time Saturday. We were even treated to some stinky goodness and Josie was super good and got some shrimp. We usually just stalk the shrimp from afar, and then when we get a chance to eat some we realize that we like the thought better than the actual snack. But Josie was all about the shrimp last night.

I hope everyone else has been having a good weekend too!
Posted by jenianddean at 12:34 AM 7 comments: 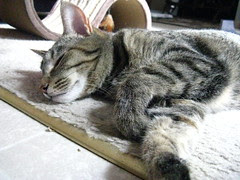 This is how we plan on spending our Friday, and probably most of the weekend. It's been that kind of week!
Posted by jenianddean at 12:01 AM 6 comments:

This should be a Wordless Wednesday, because that's how we like to do it, but Mom and Dad have been "too busy" to upload the pictures from the camera. And I know there are bound to be some good pictures. So since I don't have any recent pictures, and since I just had a sad post, I thought I would tell a nice story. The story begins many years ago, back when Dad was a young boy ...

Dad lived in North Carolina for a few years when he was little. From three to six, they lived in Cary, which used to be a small town, but now is a large suburb of Raleigh. Their neighbor had a dog named Thurber. Now Thurber was a bit of a Heinz 57, and a wild dog that would roam the ditches and anything else that made dogs like Thurber happy. Thurber was a lot of fun. He once jumped through the open window of Dad's Mom's moving car because he wanted to tag along with them and go for a ride.

Well, after a while Thurber wasn't around any more. Dad's Dad explained that Thurber had been taken to the neighbor's brother's farm where he had more room to roar and play and get into stuff. This satisfied Dad, until one day many years later, when Dad was older and more savvy, and it occurred to him that Thurber didn't go to a farm, but Thurber "when to a farm." This made Dad a little sad, but realizing that it had been decades since Dad had thought of this, he was OK.

So at a recent family gathering, Dad was relaying how he was mistaken about the "farm" when Dad's Dad corrected him, and explained that Thurber actually did go to a farm to go run, and be wild, and get dirty -- and all other dog things. And that made Dad feel a lot better.

I guess sometimes a farm really is a farm, and not a "farm."
Posted by jenianddean at 9:52 AM 6 comments:

Ain't no Sunshine when she's gone...

Poor little Sunshine didn't make it through the weekend. The tiny bunny that Dad's office manager found succumbed on Saturday. She was just too small to be separated from her mother, I think. She was buried following a nice ceremony performed by the six-year-old daughter of Dad's office manager. Although she was around only a short time, she touched the heart of a six-year-old girl, and that is a lifetime's worth of good right there.
Posted by jenianddean at 2:45 PM 13 comments:

I hope all the Moms out there had a wonderful Mother's Day. Mom and Dad were in Atlanta this weekend doing a walk for MS and I didn't get to make a post for Mother's Day. I hope everyone had the most wonderful day yesterday.
Posted by jenianddean at 7:07 AM 6 comments: 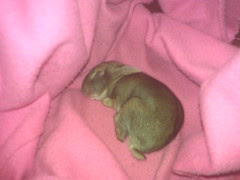 The office manager where Dad works brought in the baby bunny yesterday (and hopefully again today). They live out in the country and their dog thought he had found a new squeaky toy the other night. She managed to get the little bunny from the dog, and although it was pretty slobbered on, it was relatively unharmed. But it was also tiny tiny. Her six-year-old daughter named it Sunshine, and they're trying to nurse the little thing until it is big enough to take care of itself. I'll keep you updated.
Posted by jenianddean at 6:58 AM 16 comments: 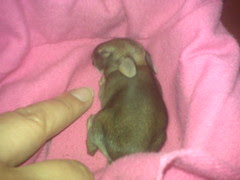 Maggie's been in stealth mode the past few days. Mom thought it would be "nice" to let Maggie take her collar off. It must have gotten caught and was tightened a little, so Mom was fixing it and wanted to let Maggie go collarless. It's nice for her -- less nice for the rest of us, who get no bell warning before the pounce. She's getting the collar back on tonight, but until then we're all on high alert.
Posted by jenianddean at 9:04 AM 8 comments:

Mom had shopped around and around looking for a new entertainment center, but didn't like anything she found, or the price of the ones she did kind of like. Then she found thin one online. It was a little bit of a gamble ordering a piece of furniture that they hadn't touched, but when it arrived Mom and Dad were so impressed. They got a great deal, and we have something new to explore. No one has made it up top yet, but the safe money is on Maggie to jump, or me to be helped up by Dad.
Posted by jenianddean at 9:35 AM 5 comments:

Read today's Lio ... funny cat!
Posted by jenianddean at 9:33 AM No comments: