OK, Kitty Cat Nap Time is almost all the time, but there's a particular time in our house when we all decide it's a good time to nap, and it's usually around 2:00 in the afternoon. We all retreat to our favorite spots and chill out. 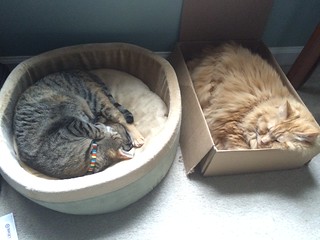 Maggie has lots of spots, but on cold days like we've been having lately she really likes the heated cat bed. I'm in my favorite box. You can see how Mom and Dad put the cat bed beside my box in an attempt to lure me out of my box and into heated luxury, but come on, look at that box! I'm pretty sure this doesn't count as us snuggling, but it might be the closest we've come to napping together in some time.
Posted by Jasper McKitten-Cat at 3:39 PM 8 comments:

Dad ordered new blades for his razor from Harry's (he really likes them ...) and they came in a little rectangular box. It was a tiny box, but Maggie didn't care. 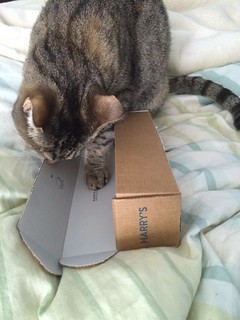 She was determined to get in the box. She tried for a minute before Mom just opened the box flat and let Maggie sit on it. That still counts, right?
Posted by Jasper McKitten-Cat at 12:59 PM 4 comments:

We got a Nano Bug for Christmas. It is like a robotic bug that vibrates around the kitchen floor. We had another one that never really got our attention, but this one has a fuzzy purple tail, and we really like to hunt this one. 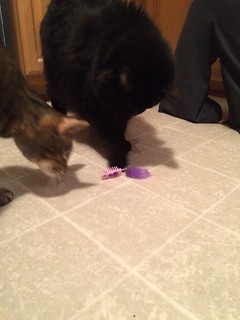 Here's Maggie and Huggy Bear investigating the bug. Huggy Bear is really drawn to purples and pinks for some reason, so he was all over this guy. 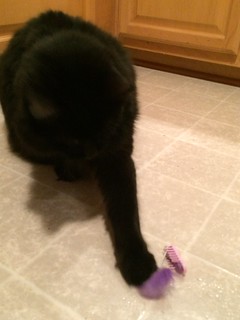 Huggy Bearin action -- whapping the tail to check things out. 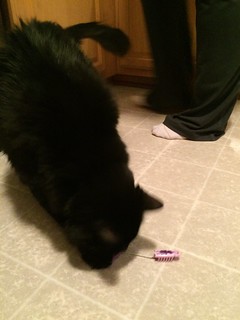 Of course, no hunt is complete until you put your mouth on it. Huggy Bear got a little excited and almost ate the purple tail, so Dad put it away on an old bread in the kitchen. We usually ignore that table, but Huggy Bear wouldn't be denied, and continued to look for the bug and found it on the table. Dad eventually had to put the bug in a drawer and give Huggy Bear some treats for all his hard work.

Our bug came from Target in the cat toy section, but they have other versions with the kid's toys too. If you don't have one, I highly recommend getting one.
Posted by Jasper McKitten-Cat at 12:53 PM 5 comments: