Mom and Dad have been working like crazy to get Mom's theatre all packed up and moved into the warehouse, and for some reason they thought it would be a good idea to have a show this weekend, too (at a different location). So most of the heavy lifting of the move is done and now Mom and Dad are helping with tech week to get The Little Mermaid up and going (this weekend only, thankfully). But what all this means is that Mom and Dad get home around midnight, crash about 10 minutes into a TV show, then are out and going again the next day to work and work again. We are looking forward to a calmer July, and hopefully visiting more cat blogs again.
Posted by Jasper McKitten-Cat at 4:12 PM 4 comments:

Labels: keeping up with Mom and Dad

This weekend is all Josie in the Cat's of the Cat Blogosphere calendar -- two wonderful days of Josie! 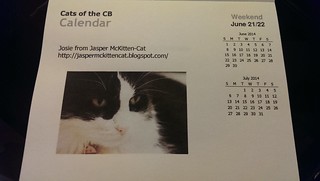 This is one of our favorite Josie pictures. I'm lucky to have such a good sister.

Thanks again to Paula for getting this organized. It is always so much fun seeing everyone each day, and seeing who is next.
Posted by Jasper McKitten-Cat at 12:01 AM 9 comments: 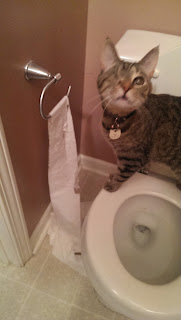 Today is Maggie's 9th birthday. This picture from a few weeks ago shows Maggie's true personality -- nine years old and still a kitten. Sure, she may squeeze between the brush and me when I'm getting brushed, and she noses in and "shares" treats with Josie and Huggy Bear, but even if she can be a stinker we are glad she is our sister. We love you Maggie. Happy birthday little sis.

The last week has been very busy. We still have a Mom and Dad although we don't see them much lately. Mom's work is on a deadline with bulldozers waiting to tear the building down, so she has been very busy packing and moving stuff. She runs a community theatre but the university owns the land where the theatre sits and they want to build their new law school on the property so 47 years worth of stuff has to be packed and moved to storage. Last weekend consisted of disassembling 200 chairs and moving them. Thank goodness for volunteers. The lighting came down yesterday, and they were setting up internet and phones yesterday and today in her new space. Lots of moving parts right now for Mom. Oh, and there's the summer play at the end of the month (Little Mermaid -- sounds tasty!). Mom was even so tired last night she fell asleep on the couch and wanted to have the four of us drag her to bed so she didn't have to get up.

Josie's lip wound has cleared up completely. She's such a good girl, but we pick on her anyway.

It looks like I'm going to have to get a lion cut. I have some pretty bad mats that Mom and Dad have been trying to brush out, pull out, and cut out. Unfortunately, when I ma getting brushed Maggie has to come and get between me and the brush because she is a brat. I get frustrated when Dad tried to pull the knots apart (even though it eventually works them out). And I got snipped again by the scissors, even though Mom and Dad didn't realize until later, and it is healing slowly so they are gun shy to use scissors again. So once things settle down with Mom's work I think I'll be getting a lion cut. At least I already look like a lion, so that should be OK. And this summer is hot hot hot here already, and it's not even technically summer yet. 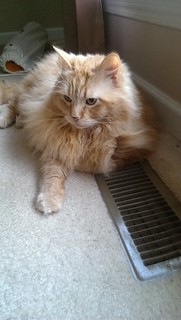 Josie got in a little tussle, most likely with Maggie, because that's what Maggie does, and Josie has two little scratches on her lip. It makes us very sad for her, because it shouldn't happen, but she is healing up OK. She is a trooper.
Posted by Jasper McKitten-Cat at 1:14 PM 7 comments: