I've been busy the past week and a half with Dad's birthday and company coming to visit that I've been neglectful of keeping up with everyone's blogs. But today I browsed over to Luna's blog in hopes of a reason to smile today, and, sure enough, there was a new post with a kitten at a vet, and Luna's signature at the end and after searching for the translation I realized she's been found! What an amazing and awful adventure with a made-for-tv ending. Happy day!

[I used Babel Fish to translate some of Luna's blog for more info...]
Posted by jenianddean at 9:59 AM No comments:

I don't speak dog, but based on the amount of noise coming from the droolers around us I can only deduct that either Cruella de Vil has taken the dalmatian puppies again or Timmy is stuck in a well...
Posted by jenianddean at 9:32 PM No comments:

Looking out for me

Mom and Dad try to be cautious of my feelings. Huggy Bear, Maggie and Josie really enjoy treats -- HB and Maggie the most. I'm slower to eat them, if I eat them at all. Mom and Dad even went out and bought treats they knew I liked and keep them back just for me. But sometimes I just don't feel like them. Dad tries to distract Maggie and HB from me to give me time to decide if I'm going to eat them, but then he feels bad when he eventually gives up and Maggie nuzzles under me and eats my treats. I guess he doesn't realize that I'm letting them eat my treats because I'm nice, and finicky. Now I will eat them right away if they put the treats with my dry food, but that's different. That's more of an appetizer. But since we've moved to the house and I've been doing the stairs, I've lost some of my belly and I can't go snacking on every treat put in front of me like skinny Maggie can, so I let her eat and think, "Plump up, little one... plump up."
Posted by jenianddean at 12:23 PM No comments:

Maggie has switched to "Stealth Mode" this week. It happened a few days ago when she took off her collar (I suspect Huggy Bear helped) and then hid it. Mom and Dad have been casually looking for it with no luck. In the meantime, she has been skulking around and sneaking up on everyone. I just hope they find her collar soon...
Posted by jenianddean at 10:56 AM No comments:

We don't mind hunting spiders or roaches (they call them "Palmetto bugs" here in the Palmetto state, I guess that makes them a little more acceptable). Hunting is actually a lot of fun for us. Now that we're out of the apartment and in a house we seem to have fewer roaches and I haven't seen many spiders at all. But thanks to the bad habits of the previous residents, we have these things called ants. Now, I don't know if you've ever "hunted" ants, but it's boring. They're real tiny so a lot of the time I just ignore them (really, all the time I just ignore them). They walk in a line back and forth. That's not hunting ... that's a buffet. So I've filed a protest with Dad -- more big game hunting (spiders and roaches) and less of this silly recreational stuff (ants).
Posted by jenianddean at 9:04 AM No comments:

Maggie on the couch 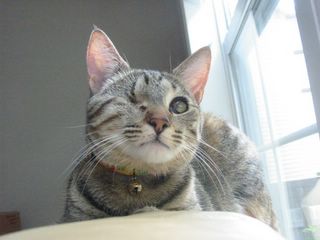 Maggie has really enjoyed perching on the back of the couch and looking out over the backyard and deck. We are still exploring and finding our favorite places, but this one is favored by all of us because of the great view. Dad has mentioned maybe getting a bird feeder, but Mom is not a fan of birds or bird poop.

Posted by jenianddean at 5:40 PM No comments:

The next four posts are a series of pictures of Josie, Maggie and Huggy investigating and attacking the drop cloth. Enjoy...
Posted by jenianddean at 12:33 PM No comments:

Huggy and the drop cloth 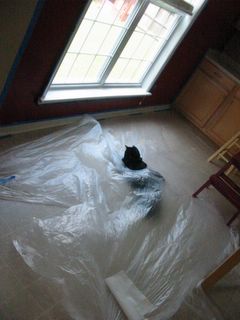 Huggy Bear also enjoyed burrowing under the drop cloth. You can see the extent of the damage to the drop cloth and the billowing of the air underneath. I think he just liked it because it was cool under there.

Posted by jenianddean at 12:32 PM No comments:

Under the drop cloth 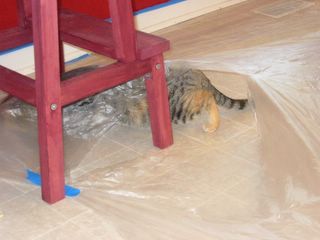 After Maggie ripped a few holes in the drop cloth, she decided to burrow under the drop cloth, making the holes even bigger. It was really a masterful job of destruction.

Posted by jenianddean at 12:31 PM No comments: 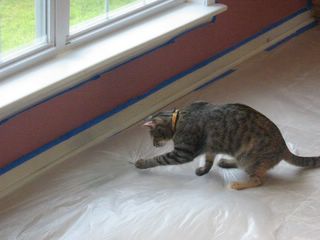 Maggie rips the drop cloth over the air vent.

Posted by jenianddean at 12:30 PM No comments: 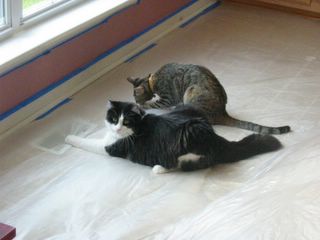 Josie and Maggie investigate the drop cloth in the kitchen.

Posted by jenianddean at 12:29 PM No comments:

Do we have a Thing-Under-The-House?

Last week, Mom had Bellsouth come and install a phone jack in the office so we can move the computer from the bedroom into the office and I can blog at night while Mom and Dad sleep. When the phone guy was here, he went under the house and noticed that two of the air ducts had fallen loose. Huggy Bear and Maggie had actually noticed one the other day because they kept looking down the vent and could see straight under the house. Mom and Dad we just distracted by the kitchen painting to realize what HB and Maggie were trying to communicate.

The phone guy said that sometimes snakes can creep up through those open vents and recommended that Mom put a box over it until it gets repaired, while she immediately did. She called the repair guy who was supposed to have fixed it as part of the home inspection and left a message.

The next morning, Mom came downstairs and heard this awful scrunch, scrape, rattle noise coming from under the house, but there was no repair truck in the driveway and we'd had no call. We were all at the box over the vent, eager to discover the source of the noise. Maybe it is a Thing-Under-The-House like Ginger's Thing-Under-The-Sink. Mom moved the box and yelled down, "I hope you're a repair guy under there fixing this." (I'm not sure what she would have done if the answer was a creepy "...no...") The response was a light-hearted laughter and a voice saying "I didn't think anyone was home." I guess he'd parked out in the cul-de-sac where Mom couldn't see his truck.

It was a quick, uneventful end, but did provide a few good minutes of excitement.
Posted by jenianddean at 10:47 AM No comments:

Checking out the backyard 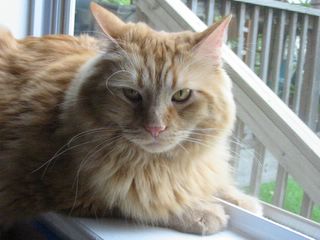 We had a nice mild day and Mom opened the windows in the kitchen and we got to sit in the window and look out and smell the new backyard.

Posted by jenianddean at 2:43 PM No comments:

Maggie on the catwalk 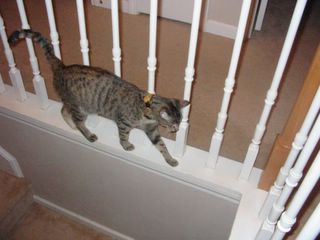 Maggie is having a lot of fun on the catwalk. Maggie and Josie are small enough to walk on the wrong side of the hall by the stairs. She's pretty daring. I think my belly would bump me off and I would fall. Look at that fancy footwork and use of the tail for balance. Impressive.

Posted by jenianddean at 2:59 PM No comments: 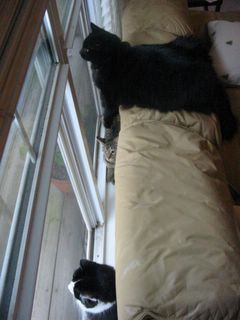 Huggy Bear, Maggie and Josie gathered around the couch and looked out the back windows at a chirping bird that was fluttering around the deck. The birdie was doing a lot of talking, and although we were all tempted, we resisted the urge to tear through the screens and chase it.

Posted by jenianddean at 2:49 PM No comments: 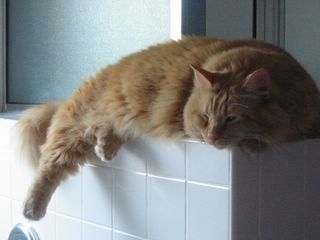 This is my new spot. There is this little wall in the master bathroom between the standup shower and the garden tub with a nice big window overlooking a tall tree, backyard and the deck.

Posted by jenianddean at 2:39 PM No comments:

Dad shared his lessons from painting the kitchen. His top three were about us...
1) If you leave the paint pan out, a cat will eventually put a paw in it.
2) Even if you close the air vent, air will still blow the drop cloth, and the cats will attack it.
3) A drop cloth with holes in it from being attacked by cats at some point stops serving its role as a drop cloth.

It was Huggy Bear who decided to sample the red paint. His paw prints were noticed quickly and Mom snagged him after only one step on the carpet, which was cleaned right away. As for the drop cloth, come on, what do they expect? It taunted us over and over so we had to slay it.

I promise pictures soon of the slaying of the drop cloth. Dad should finish the kitchen tonight (finally) and he can help me post pictures then.
Posted by jenianddean at 10:18 AM No comments:

Dad has got to quit all this power tool business. He seems to think now that he's in a house he gets to use his toys again. Well, this silliness has got to stop. I'm losing weight tearing from room to room to get away from the noises he's making. Last night it was the power sander ... dust everywhere and noise like you wouldn't believe! Why doesn't he go outside and cut the grass if he wants to make noise?
Posted by jenianddean at 2:07 PM No comments:

I wanted to share this website with you. Dad was referred to it from the Dog Eat Doug blog. My favorite from gallery one is either Bored, Walkies or Toy Mountain and from gallery two Cat Camo Orange, N'Sink or White Paw, but they're all fun.

I've been behind on the picture posting, but there are a lot of pictures to post. I'll get some up soon.
Posted by jenianddean at 9:49 AM No comments: