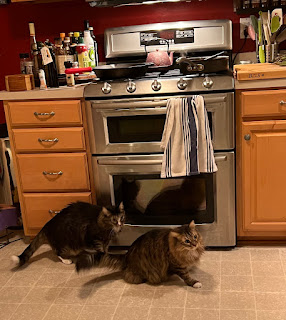 Don't mind us, we're just watching the stove. You know, just in case something happens and Mom needs our help. Aslan has a tendency to want to jump on the stove (99 percent of the time when it is off) so he can come up and snoopervise so either Mom or Dad has to keep an eye on him when the burner is on to make sure he doesn't make a poor choice. So far, so good. We have gotten few treats for "helping."
Posted by Jasper McKitten-Cat at 9:18 PM 4 comments: 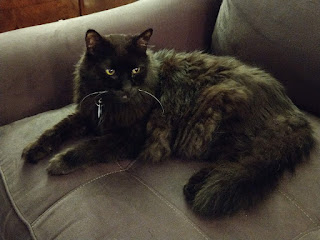 Happy Black Cat Appreciation Day! For those who never met him, this is Huggy Bear. He was Mom and Dad's lovable house panther, always by your side, the cat with the Insta-purr the second he saw you, night hunter of all the toys, and a big fan of whatever you were eating. He crossed the bridge in 2019 and left big mittens for us to fill. Mom and Dad miss this guy a lot, but they are so thankful for the 14-1/2 years of love he gave them.
Posted by Jasper McKitten-Cat at 8:06 PM 4 comments: 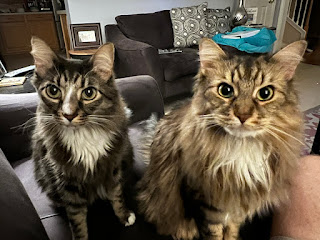 Dads can say the craziest things sometimes. Like the other day Dad looked at us and said, "You can't have treats all the time. You just had some five minutes ago." Like, who says silly things like that? Mom sure doesn't.
Posted by Jasper McKitten-Cat at 9:56 AM 1 comment:

When our neighbors go out of town Dad will go down and check on their cats for them. They have to big Mancats, Moochie and Zach, and sometimes the neighbor's daughter's cat Gracie will be there too. They have a cat door from the kitchen into the garage where the litter boxes are. And the neighbor will leave the large garage door cracked just the slightest amount to ventilate the garage.

This past weekend Dad was checking in on all three cats. He hadn't seen Zach, which isn't anything out of the norm because he usually hides from Dad, but he had seen Moochie and Gracie. Everything was going fine. Then Sunday night Dad was driving home after a late quick trip to the grocery store and he sees this brownish cat-shaped blur run toward the neighbor's house. "That can't be Gracie," he thought, "but I'm going to go and check anyway."

Dad walks down and looks and the garage door looks to be opened about an inch higher than normal -- apparently just enough for the cats to slip under. Dad looks and sees Moochie under one of their trucks. He's usually a pretty amiable cat so Dad figures he'll just squeeze under the truck and scruff him and bring him in. Well Moochie is having none of it. He hissed and swatted at Dad.

Dad figures Moochie is set where he is, so he goes in to do a head count. He can't find any of the cats! So he calls the neighbor who talks him through setting the cat door to only allow them to come in but not go back out. Then Dad went out and opened the garage door more to allow the cats to get in easier. He figures he'll prod Moochie with a broom. Moochie thought he'd wander around the house. It is dark out and Dad was having none of this, and was able to herd Moochie into the garage. As Moochie came in Dad heard the cat door flap and thunk closed. (Gracie is in!). Then Dad shut the door completely and saw Moochie under the car in the garage (vintage Mustang). He was set and not budging and made sure Dad knew it.

But Zach was out, and there was no sign of him. He's played this game before. Dad opened the door the the screened in porch to give Zach some shelter. But other than that there was little Dad could do. The neighbors weren't too worried about it. Sure enough, the stinker came home the next night, hungry and eager for affection. But Mom and Dad were super stressed out.