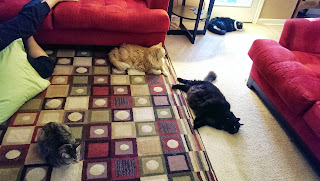 Mom is laying on the living room floor watching Breaking Bad (season two). We have her surrounded -- Huggy Bear is behind her, Maggie is up by her head and I'm down by her feet. Josie is keeping watch by the edge of the room. This is the aftereffects of having their friend's twins (18 months old) overnight. (In the picture HB moved around so he could be seen.)

Josie was very brave with the kids. She even let them give her treats. HB and I would visit (HB more than me). Maggie stays clear. 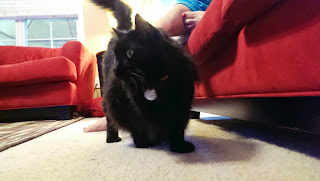 Happy Gotcha Day to me!

I normally don't make a big deal out of my Gotcha Day, but it came up in conversation yesterday so I figured I'd post about it. I don't hype it too much partly because Mom and Dad have an exact day for me, but a vague one for Josie, Huggy Bear and Maggie, and I don't want to make them feel left out. But this technically is MY blog, so here goes...

This is one of Mom's favorite pictures of me as a kitten. This was right when I came to live with Mom and Dad.

I would hide under the rocker so they always had to check before sitting in the chair.

Look how tiny I was! This was my very first portrait.

Maggie's not the only one who would unroll TP. I loved that window...

I wish I still fit in this bowl. It was so comfy!

I am very lucky to have landed with Mom and Dad. I can't believe it was 11 years ago!
Posted by Jasper McKitten-Cat at 1:04 PM 12 comments:

Wild Insect Kindgom at our house

We have had a crazy rainy summer and it has turned our house into a Wild Insect Kingdom.

The other night Mom and Dad were playing on the Wii (Lego Harry Potter) when they noticed this giant moth. At first Mom questioned if it was a bat, but no, it was a moth.

For the most part we ignored it, but Maggie did give it a passing glance. The thing is as big as her head!

Every year our beautiful yellow writing spider returns. He is usually in the shrubs, but this year he decided to make camp on the cafe table in the front porch. Look at that amazing web!

He really is something to behold.

Part of me wants to "play" with him, but I'm afraid it would end poorly.

Of course, this isn't an insect, but we had a lizard visitor the other day, too. He stayed away from the garage so we didn't get to hunt him.

But Josie did get to catch a roach in the house the other day. (Just reality of living in South Carolina. Rarely happens to up, but it happens.) But Dad was quick and made her give it to him before she could eat it. She did get a bunch of treats for being an excellent huntress, though.
Posted by Jasper McKitten-Cat at 2:50 PM 6 comments:

We just learned that Abby from ManxMnews went to the Rainbow Bridge last night. She had been ill, but that really doesn't make it easier. We met Abby through Secret Paws. She was one of our first Secret Paws back in 2007. Although I don't get to make the rounds to the blogs as much as I used to, I always enjoyed keeping up with Abby when I could. She is such a beautiful cat with such a great spirit. She will be missed. Our hearts go out to her family, and to Boo, Gracie, Jinx and Ping.
Posted by Jasper McKitten-Cat at 11:20 AM 4 comments:

Of course, we all know every day is world cat day, but today is World Cat Day! We're celebrating by showing a couple of Josie pictures. (Josie is so under-represented in the blog anyway.)

The other day, Josie went into the garage and preceded to spend the next few hours right here, watching the little gap in the garage door, waiting just in case something tried to creep through. She didn't catch anything, but you just never know.

This is how Josie tries to keep Dad from going to work. As he's putting his shoes on she gets all cute and goes into rub-my-tummy mode. Then she'll grab him and try to make him stay. It hasn't worked yet, but she's determined to keep trying.

We saw a crazy huge moth on the back door the other night. Dad has a few pictures of it he needs to upload, then I'll post them for you. Just you wait... it's nuts!
Posted by Jasper McKitten-Cat at 12:34 AM 6 comments: