Maggie has switched to "stealth mode" this week. She somehow managed to take off her collar and hide it real well. Mom and Dad have been looking, but no luck so far. They think it may be in the garage. I think this is Maggie's way of asking for a new collar. Mom's been meaning to order new address tags for us anyway (which means I may get a collar, too, and I don't know how I feel about that). If I do have to wear a collar, they better get me a cool one!
Posted by jenianddean at 10:54 AM No comments:

I usually watch The Daily Show with Jon Stewart with Mom and Dad. Every now and then, we'll also watch The Colbert Report. Occasionally he will put someone "On Notice" for something they have done. So I decided to put some things on notice myself... 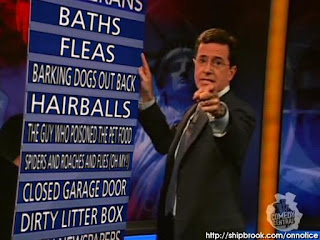 I think they're all self-explanatory, but those spiders have already started showing up, but no roaches or flies (but they better watch out ... they're on notice). And there's nothing worse than running downstairs thinking I can nap in the garage and finding the door closed.

(You can create your own On Notice board here.)
Posted by jenianddean at 12:49 PM No comments:

This is our first Tummy Tuesday. I hope everyone loves our yummy tummies! FYI the little white shot on my tummy was the first part of me that my mom felling love with. 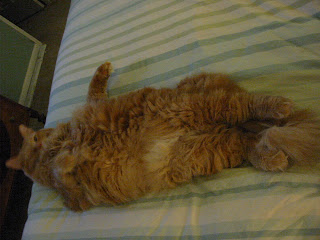 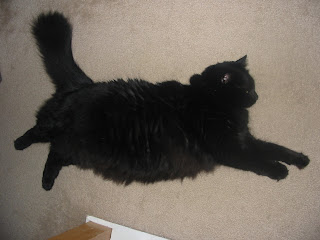 Posted by jenianddean at 9:54 AM No comments:

Open letter to Mom and Dad

Dear Mom and Dad,
I understand that we are in a house and that you will have projects. But the weekends are the only time you both are home. This is "us" time, not hoUSe time. Opening the windows so we can sniff you while you work outside and we sit inside is not "quality time." Yes, the fence looks good after pressure washing it, and the stained portions look really nice, but it's time to visit with us, pet us, and maintain the proper level of attention that we have grown accustomed to. Please take this into consideration with our next weekend a short five days away.
Thank you,
Jasper, Josie, Huggy Bear and Maggie
Posted by jenianddean at 9:11 PM No comments:

Mom and Dad have been really busy the past few weeks, mostly with projects around the house and work. (I actually had to force Dad to help me post this one before he left for work or else there's no telling when I'd get more pictures up...) Mom and Dad cleaned out the garage and put up more shelves, and straightened the space under the stairs. Although I miss my really tall stacks of boxes to sleep on, my space is still there, only lower. 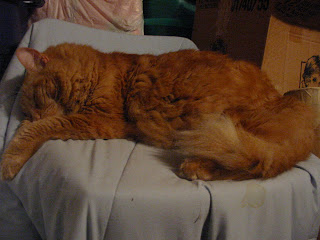 I did find a new spot... I fell asleep on the table portion of an old high chair. I guess this high chair was Mom's mom's high chair when she was a baby. Works good as a napping spot, too. 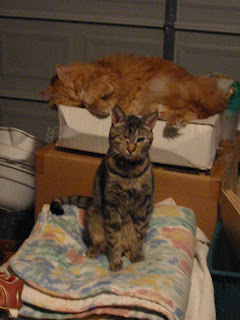 Maggie and I have been doing a little napping in the garage. It's still a great napping spot with all the comforters covering stuff. 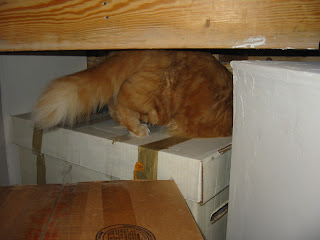 When Mom and Dad were re-organizing under the stairs I just couldn't help but make sure they did everything just right. Looks good, and made more room in the closet, too.
Posted by jenianddean at 6:58 AM No comments:

Mom and Dad are going to go see a water skiing squirrel. That's craziness like I've never heard before, but I'll tell you what, they better take pictures! Maybe if we put a kiddie pool in our back yard we can convince a squirrel to come and ski for us...
Posted by jenianddean at 12:16 PM No comments:

Dad's cousin Kerry and her boyfriend Joe visited us for the night on Sunday. They had a leak in their basement and it flooded two to three feet so they had to shut off their water and furnace and they came and stayed with us. The best thing with having company is extra attention. We got to sniff new smells and they played ice cube with us a lot! Too bad their basement had to flood for us to get this extra attention, but it was nice to have visitors.
Posted by jenianddean at 4:36 PM No comments:

This piece of paper ended up under Mom's dresser and Josie has taken claim of it. She'll wiggle her little body under the dresser and paw and swat the paper over and over. Under the dresser is a pretty safe spot since for someone else to get under there you have to get real low and crawl in, so Josie can play with her paper in peace. 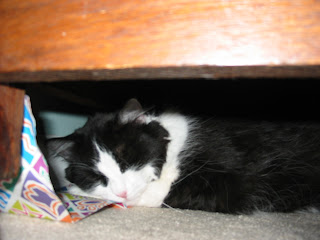 Speaking of peace, the other day I was enjoying a nice nap on the green and yellow Kitten Kozy and Maggie can up and gave me a nice bath (Mom said I probably needed a bath anyway, but I think she was doing more grooming than cleaning) and then Maggie cuddled up with me. It was so sweet ... until she turned around and bit me on the butt!
Posted by jenianddean at 2:03 PM No comments:

This is not the kind of press we need as cats... I think they were probably disoriented or confused and that's why they attacked. Who knows how the people reacted to stray cats in their home, too.
Posted by jenianddean at 11:20 AM No comments:

Dad enjoys reading comic strips and he's been reading Dog Eat Doug since it started. They recently opened an online store of prints and such at Cafe Press. My favorite says "I Think, Therefore I'm A Cat."
Posted by jenianddean at 7:15 PM No comments:

Mom and Dad were at Petsmart last night and picked up a new cat scratcher for us. It's one of the angled ones. As soon as Dad set it up HB was on top of it. Then Dad started sprinkling it with the nip and HB and Maggie started licking the nip. They pushed it all around the dining room last night. (Mom and Dad think this just might get Huggy Bear to stop clawing up the chairs ... HA!) They also bought a dog harness to start taking the neighbor's dog for walks. I guess they want to get exercise or something. Better they try to take the dog for a walk than one of us, I guess...
Posted by jenianddean at 12:59 PM No comments:

The shortest outdoor adventure ever

Huggy Bear had the world's shortest outdoor adventure today. Mom and Dad were out working in the garage, which meant that the door from the house to the garage was shut and the big door to the outside world was open. Well, Mom found and old decanter that had been her grandmother's in storage and wanted to bring it inside immediately so nothing happened to it. She decided to try the door to the inside where we were holding vigil. Although she knew how fast we could be, she thought she could hold us back and slip in. Well, it seems she underestimated Huggy Bear. He squeezed past her immediately, but Dad was right there, just in case, and he scooped Bear into his arms. Mom managed to shut the door behind bear so no one else slipped out, and she and Dad took Bear around to the front door (ironically, we never try to get out the front door). I think Bear realized his goof when Dad was carrying him around front, because he started to sniff the air and give Dad a few leg twitches as they approached the front porch. He seemed pretty happy to be back inside, too.

Mom and Dad really did a number on the garage today. They put up some more shelves in the garage, and moved a bunch of out boxes onto the wall. Our towers we like to perch on our now much shorter, but they did give us a stack or two to climb on. I think they eventually want to put a car in the garage. What kind of crazy is that?
Posted by jenianddean at 6:09 PM No comments:

Last night, Maggie had some issues with Dad's iced tea. He had placed a glass on the floor by the sofa, and Maggie ran past playing ball and barrelled over the glass, spilling tea everywhere. Dad cleaned it up, shaking his head but knowing it was his fault. While Dad was cleaning up, Mom got a phone call so Dad fixed a second glass of tea and came upstairs to the computer to read his comics. Maggie followed and chaos ensued. Maggie was persistent in her pursuit of the ice cubes in Dad's drink. Dad gave her a cube in the tub for her to play with, but that did not pacify her. Finally, Dad had the glass on the desk supported by one hand when Maggie jumped up. Dad used his other hand to get Maggie from the desk, and with the last hair of her paw she managed to tip Dad's tea all over the desk, the keyboard, Dad and the floor. Expertly done, but Dad was not pleased. He even raised his voice at Maggie, although I think he was more upset with himself for having drink around the computer to begin with. Everything cleaned up fine (although Mom found more tea this morning) and no important papers were destroyed, but I think we all learned a lesson from this. (Dad's lesson, don't have tea around the computer. Maggie's lesson, persistence pays off, although I think there could be another lesson for her in there somewhere.)
Posted by jenianddean at 4:17 PM No comments:

Josie loves to help make the bed. Mom had just finished making it up all neat and Josie came up to inspect. It turned into a perfect nap spot (and a few minutes of cleaning Mom). Doesn't she have a perfect pink nose? 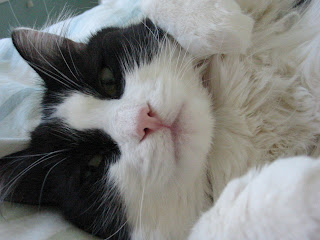 Posted by jenianddean at 4:07 PM No comments:

Mom and Dad returned from a trip to Target excited. It appears that Easter is coming, which means Easter candy. Mom's favorites are Cadbury Creme Eggs (which are Maggie's favorites, because she likes to take the balled up wrapper and run off with it a bat it all over the place, then hide it). But Mom and Dad also brought us a treat ... stuffed Easter Peeps! There is one for each of us, but the hard part is deciding who gets what color. I'll leave that decision to HB and Maggie. 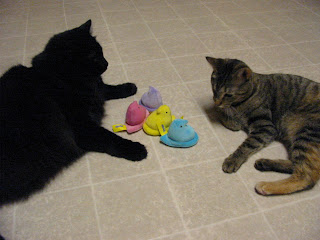 Posted by jenianddean at 1:18 AM No comments: