Huggy Bear and the lizard

For everyone who heard the scream around four o'clock yesterday, have no fear, it was just Mom battling a humongous lizard in the upstairs bathroom. She found it because Huggy Bear was trying to get it, and Maggie was watching him in action. The lizard was hiding behind the bathroom door (opened against the wall). The lizard was about nine inches long, body and tail, and an inch-and-a-half wide in the chest. Mom suspects that Huggy Bear found the lizard in the garage and brought it up to show Mom, but took it to the bathroom where HB likes to hang out.

Mom knew she'd have to capture the lizard herself, and quickly, because she needed to go get Dad from work, and didn't want to leave the lizard in the house (to hide somewhere, or be hunted).

Mom ushered HB and Maggie out of the bathroom. She wanted to try to get a box to put the lizard in, but didn't want to leave the lizard in the bathroom, and all four of us were at the door investigating the commotion on the other side, and digging and pawing at the door. When HB had the lizard cornered, the lizard was perfectly still, but now that it was just Mom and the lizard, things were starting to heat up. Mom dropped the bath mat on the lizard in an attempt to capture it, but the lizard just went wacko. Mom let out an aaah, aaaAAHH, AAAAAHHH because the lizard was thrashing around and flicking his tail and looking at Mom sideways and blinking at her in a threatening way and skating all around the slick bathroom floor. And it was fast, and big and Mom wasn't really sure how she was going to, first, catch it, and second, get it out of the house. So quick thinking, Mom chased the lizard/mini-Komodo Dragon up the shower curtain (where it either bled or defensively oozed onto the white curtain), and tricked it into "escaping" into the trash can. Then Mom covered the trash can with the bath mat and rushed the lizard outside (much to the entertainment of the neighbor, Mom is sure). Later, Mom saw no sign of the lizard, so it survived enough to go somewhere else, hopefully far away. 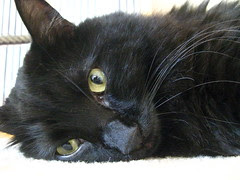 Huggy Bear was pretty proud of himself, and took a well-deserved rest. He praised Mom for her lizard hunting skills, and gave her the title Lizard Hunter Extraordinaire, and said that should be on a badge or certificate. (Mom hopes to never have to use those skills again.)
Posted by jenianddean at 12:10 AM