The Christmas tree is up!

Finally, after one excuse or another, Mom and Dad have our Christmas tree up -- the first one, at least. Dad says he's putting another one up tomorrow and putting ornaments up. 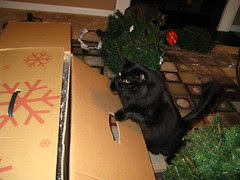 We all helped snoopervise, and Huggy Bear did some serious investigating of the box the tree came in. Here he is just starting to leap onto the box (he didn't go through the lid, although it looks like he could). Although he doesn't show it too often, HB does have an athletic side. 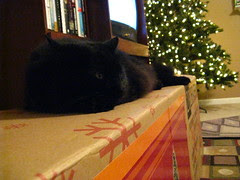 Huggy Bear liked lounging on the box while Dad strung some extra lights on the tree. 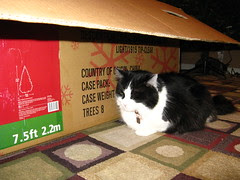 Josie liked the box too, and was trying to relax under the flap when Dad insisted on flashing the camera at her. (Yeah, Dad, what's up with using the flash and making her squint?) 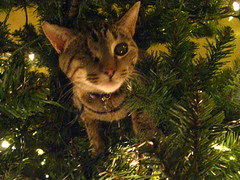 This will be a familiar sight for the next few weeks ... Maggie up in the Christmas tree. This was her first climb. Later on, when the camera wasn't around, she climbed almost to the very top of the tree.
Posted by jenianddean at 12:04 AM