Santa left us a Christmas gift ... a crinkle hat. I guess this is like what his elves wear. 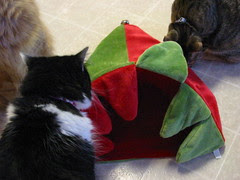 At first, we weren't real sure about it. 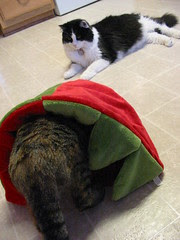 Maggie was the first to go in and explore it. I think she was really after the fresh cat nip inside. 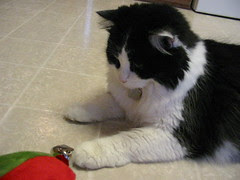 Initially, Josie was satisfied to just study the bell at the tip of the hat. The crinkling made her a little nervous. 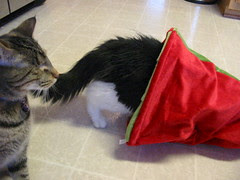 Eventually she did go in the hat. She was trying to sneak up on the bell, I think. She ended up pushing the hat around the kitchen for a few minutes. We're still trying to figure out this thing, and decide if we like it or not. (I think the hammock from Secret Paws is winning, right now.)
Posted by jenianddean at 6:49 AM