The Jump and Shout contest is over, we know, and Huggy Bear really isn't much of a jumper or a shouter, but he did put up his best effort during some jumping photo shoots and I figured, since he tried so hard and all, I should at least post his picture and let him show off a little. So no, everybody, it's not the smoke monster from Lost, it's just Huggy Bear, leaping. 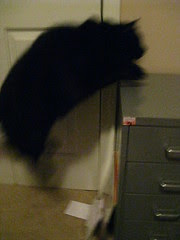 Look at the form and the motion. Unfortunately, he was competing against Maggie's crazy jump picture from when she was a kitten ...
Posted by jenianddean at 12:09 AM