The PhotoHunt theme of Hats is a little bit of a challenge for us. Unlike the talented Daisy, we won't wear hats. Mom and Dad have some hats, but they don't wear them either. When Dad tries to wear his Tennessee hat, Mom usually tells him he looks like Bill Dance, and Dad's no bassmaster, so he doesn't wear the hat. (Let's face it, some people can wear hats, some can't). But we wanted to show some hats, anyway. 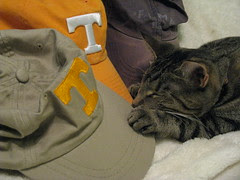 Maggie was willing to model with the hats. These hats are from the schools Mom and Dad went to: the University of Tennessee and Palmer College of Chiropractic. The Palmer hat is really the only one that has seen some good wear and tear. Dad wore this one when he went to Nepal (2001), and then when he and Mom went to Fiji (2003) -- they were doing some mission work providing free chiropractic care with a group from Palmer. 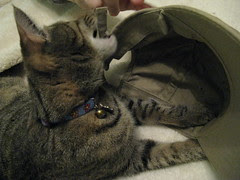 Mom and Dad tried to get Maggie to pose with Mom's Tennessee hat on her head, but Maggie decided it would be more fun to try to bite the hat instead. I can't blame her. (Tennessee is actually playing Praline's Gamecocks in basketball today, which isn't as big a deal as if they were playing football, but for Praline's sake: Go Vols! hehehe)
Posted by jenianddean at 9:34 AM