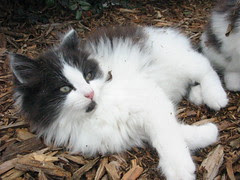 He's a she....
Originally uploaded by jenianddean

And our favorite sticky people (Gracie and Clara Ann) need some suggestions for a name for this super cute kitten.

When they thought she was a he, his name was Guido. But now he's a she and needs a girly name. Her litter mate who was named Julianna is now named Jackson...yep, she is actually a he. Her new sisters in the house are named Lane and Meowy.

So give us some suggestions for girly names and we will pass them on. And if they pick one of the suggestions, mom and dad will send out a small prize to the winner.

Posted by jenianddean at 1:44 PM