Yes, it is Finally Friday, and it looks like Mom may be clocking out a little early because she's close to 40 hours and doesn't want to go over, which means that Dad will run some errands after work, then get Mom and come home to be with us!

Last night Mom and Dad stopped by Sam's to get some essentials like bread and milk, and they came home with an unessential but very nice prize for us -- a giant pet bed tuffet! (I'm ignoring the big dog on the label because I know this was truly meant for cats to enjoy.) Mom has wanted a tuffet for a long long time, and finally gave in. They were torn between the one they bought and another, so maybe we'll end up with two! 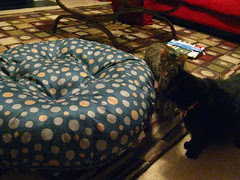 At first it took some investigating by us. This is not the kind of thing you rush into. 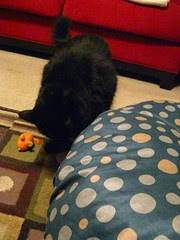 Huggy Bear did some sniffing. 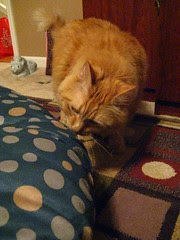 I gave is a good sniff, too. 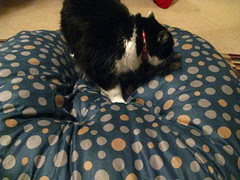 Josie walked on it briefly. 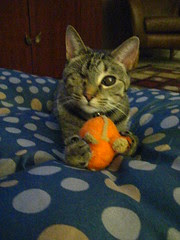 Dad used Orange Mouse to entice Maggie onto the tuffet. 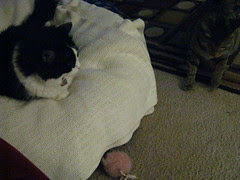 Dad also tried to coax Josie onto the tuffet by putting a familiar blanket on it, which worked for a little while. 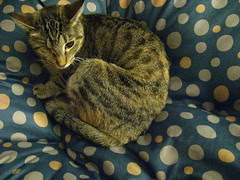 Eventually, Maggie, as expected, was the first to accept the tuffet and make a warm curly-up spot on it. Mom's only rule is that the tuffet is a daytime sleeping spot, and one of us must still snuggle on her feet at night.
Posted by jenianddean at 12:06 AM