Saturday was such an amazing day outside that Mom and Dad actually decided to eat lunch on the deck! This doesn't happen often ... it's not that they don't like the deck, or that they don't like eating outside, it's just that they kind of forget, and there's no TV or cats out there, which really has to take away from the dining experience. But Saturday they thought they'd eat outside, and figured maybe Maggie would tolerate the harness and sit with them while they ate. 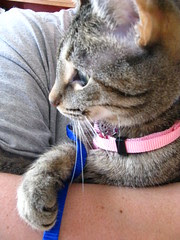 Maggie isn't great about letting them get her harness on, and she likes to roll around and try to attack it, but they used some treats to calm her and get her used to wearing it (Huggy Bear and Josie also benefited from the treats). Then Mom carried her outside and set her down on the deck. 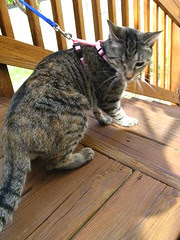 Maggie was a little more adventuresome than Josie when she was on the deck. Josie explored the deck some, but Maggie was more curious about the stairs. 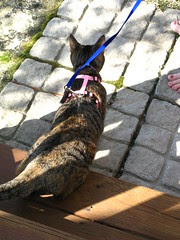 Mom let Maggie go down the stairs to the paver at the bottom of the steps. Maggie looked under the steps but decided against trying to go under (I don't think Mom would have let her go under anyway) and decided to come back up. 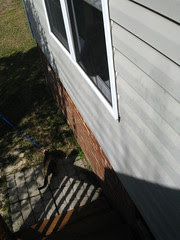 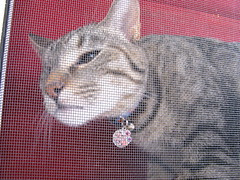 I think Maggie had fun exploring the outside stairs, but Maggie thinks the air smells better from the other side of the screen, where there is no harness and plenty of soft couches to sleep on.
Posted by jenianddean at 6:57 AM