While we don't play in the crinkle tent too much (probably because it is a small cone), we do play in our IKEA tents a lot. 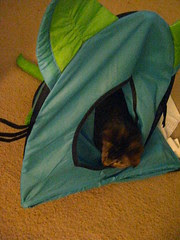 Sometimes Maggie plays a little too hard though, and the tent "malfunctions". That doesn't stop Maggie, though. She'll just keep on playing while the tent comes down around her.

(Speaking of IKEA, I think Mom has an IKEA problem. The weekend before, when Mom and Dad were in Atlanta, they went to IKEA that Sunday. Then Mom had to be in Charlotte on Monday and went to IKEA. Then when they got to Cincinnati on Friday, they went to IKEA again. Yikes!)
Posted by jenianddean at 6:51 AM