I know I said that this week would be about Josie and Hubby Bear, but Mom and Dad brought back some pictures of their friends' cat and dog that I had to share. Lizzie is the dog, and she thinks that Hobbes, the new kitten, is her baby. She cleans him, and tries to pick him up. Hobbes is very patient with Lizzie and tolerates her fumbling attempts at picking him up. 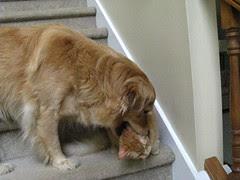 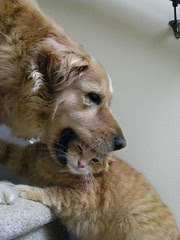 Lizzie loves Hobbes so much that she really wants to carry him around, but she really needs to work on her technique. It's funny that Hobbes tolerates his entire hear in her mouth. It looks bad, but she's not hurting him, just aggravating him some. 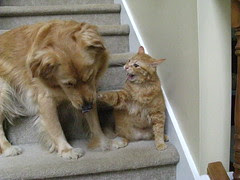 Eventually Hobbes lost patience with Lizzie and told her to give it a rest. Dad picked up Hobbes and he was soaked from dog slobber.

[Also, this is a funny Lio comic.]
Posted by jenianddean at 6:52 AM