Remember Zak that Mom and Dad delivered from Aunt Lisa to the lady down the street? Well, one of his litter mates, Jackson, wasn't integrating too well with the other cats at Aunt Lisa's house. He was having all kinds of problems with pooping and peeing in all the wrong places. Aunt Lisa was at her wit's end and didn't know what to do. So the nice lady down the street said, "Bring him to me." So Mom and Aunt Tiffy delivered Jackson to Zak's house last night so that Jackson could get a second chance at a new beginning. 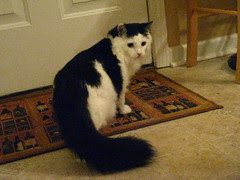 This is Jackson. He was exploring the kitchen, and working his way around to the food bowls. 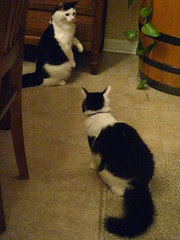 He found this neat plant that hangs down. He was circus-bearing up to investigate the plant, while Zak was venturing a little closer to investigate Jackson. They're from the same litter, but it's been a while, and this is Zak's turf now, so there was definitely some hissing last night. 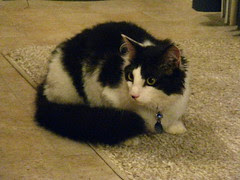 Zak really wasn't sure about this fast cat that's slightly bigger than him. He stayed low and defensive while Mom and Dad were there, then headed upstairs before they left. 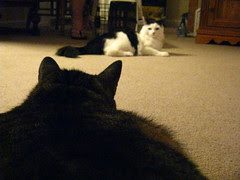 Plus there's Zoey, the older cat, who's already been through this once a few months back when Zak showed up. She was a little more accepting of Jackson, and even snuck up behind him and sniffed his butt. But she thought the flat cat position was best to study Jackson. 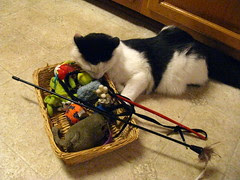 Jackson did find the toy basket, so I'm pretty sure he knows he's in a good place. This might be a temporary stop and he might go with the neighbor's Mom back to Oklahoma when she comes to visit next month. Either way, Jackson is getting a second chance.
Posted by jenianddean at 7:14 AM