We're still a little shy on pictures ... they're on the camera, but not here yet. Yesterday we used a "classic" Maggie picture, when she first discovered the joy of TP. Yes, she still gets the TP and unrolls it and occasionally shreds it. Mom is still very busy with the play, which is giving her some late nights. But Mom, Dad and Aunt Tiff all managed to sneak away last night and catch the late showing of Coraline. It leaves the 3D screens today so they wanted to catch it before they lost the 3D effect of the movie. They told me about it -- a little spooky, but I liked when they told me about the heroic cat. You can't beat a movie with a heroic cat! I hope to have new pics tomorrow ... otherwise it might be back to the vault ... maybe some old kitten flashback pictures. 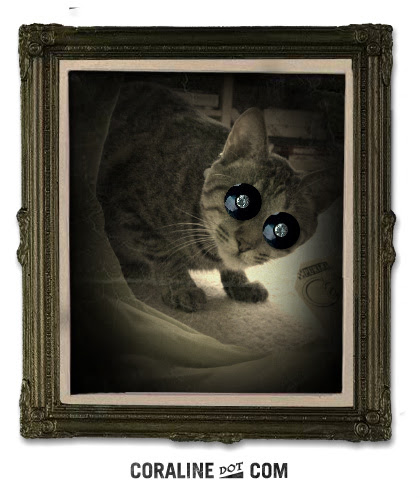 Here's Maggie with button eyes, for those of you familiar with Coraline. I didn't pick on Maggie and her eye issue, but liked this picture because she's looking through her cat tunnel which resembles a key element from the movie. I did give her fancy buttons, because she's fancy. If you want to see what you look like with buttons for eyes, you can here.
Posted by jenianddean at 7:01 AM