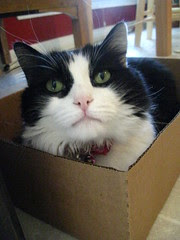 The box from yesterday's Wordless Wednesday was officially claimed by Josie. She normally doesn't get in the mix with that stuff, but she made sure this one was her's. At least until company came and the box had to leave the kitchen and go up to the office. We don't like it as much in the office.

Remember a while back, I told a funny story about a friend's dog who likes to eat the mail as it is passed through the mail slot in the front door? Well, the dog, Mary Gertrude, just hates the mail slot. When that little flap gets flipped she just goes nuts. And recently, Mickey, our friend's 12-year-old cat, has gone through a bit of a mid-life crisis. After years of being a laid back, cool cat, now Mickey is slipping out through Mary Gertrude's doggie door, bringing in prizes for our friend Randy (including a live baby rabbit the other day, which Randy rescued). One day Randy was up on the roof fixing something and he looked over and there was Mickey. He's just turned into a rascal lately.

So the other evening, Randy is in the living room and Mary Gertrude hears the tink-tink of the mail flap and just goes nuts. Randy knows it's too late for the mailman and opens the door to see who is out there and there's Mickey, sitting at the front door. Mickey has learned that it gets the dog all kinds of crazy when he plays with the mail slot flap, and does it all the time now. I think we know who the smarter animal is in that house.
Posted by jenianddean at 12:34 AM

A good box is a thing of beauty.

Josie fits in that box quite nicely. But you're right--once you claim a box and the box gets moved, it's just not the same.

That was one hilarious story! It sounds like he's just a different kind of cool cat now!

Mickey absolutely rocks!!!
What an awesome cat! A geezer cat with a sense of humor!

Josie, you are so cute in that box. Mickey, how funny that you play with the mail slot to annoy the dog. MOL