Maggie just has to be in the middle of everything. Just last night, Josie was enjoying some time behind the books of the bookshelf (Dad pulled a few out so she could hop up) and then Maggie tried to crowd herself in which turned in to a big, growling, chase-Josie-fest with Huggy Bear and Maggie. She's just being a playful, affectionate little sister. I try to be a little more patient with her because I know Josie isn't (maybe it's a sister-sister thing between them).

In today's picture, I was up in the linen closet when Maggie decided to come up with me and hang out. Mom feels compelled to sing the Brady Bunch song when she sees this picture. Apparently we look like two Bradys stacked on top of each other. (But of course she sings, "It's a story, of a cat named Jasper...") 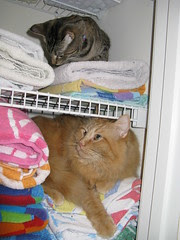