I thought I would feature the one who came before. Mom scanned in some old photos of Fluffy. He was a regal gray and white tuxedo who roamed the neighborhood, and also came in when he felt like it. The side garage door was always propped open for him so he could come in, but he'd also come to the back window of the master bedroom and "ask politely" to come inside. He would even "ask politely" for some milk by nipping the back of Mom or Dad's ankle. 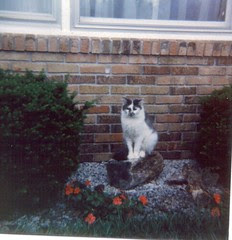 Mom says that this was Fluffy's spot. He would perch in the front yard and patrol the street. He was the prince of the neighborhood. Everyone knew Fluffy. The neighbor across the street would even put tuna out for him and he would lounge on her front porch in the afternoon sun. 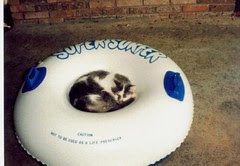 This is one of Mom's favorite pictures of Fluffy. He would curl up in the center of the innertube and sleep. I wish we had one of those, because that looks like a great napping spot! 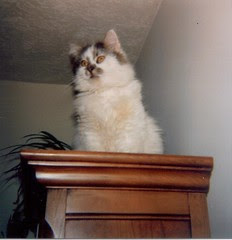 I guess Fluffy liked to get up on high spots too. He must have been pretty spry, because he had to jump straight up there without the help of a counter or a step stool! 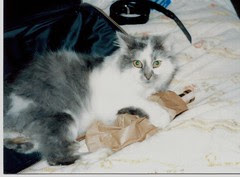 This photo does concern me a little. I think Fluffy may have had a drinking problem. Just kidding... he did love a suitcase, though. But, then again, who doesn't?

He was a good cat, and did a good job of training Mom and Dad on how to properly care for us McKitten-Cats.
Posted by jenianddean at 8:44 AM