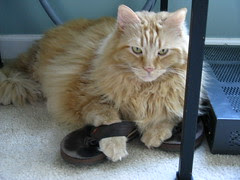 OK, the shoes don't stink ... I put my stink on Mom's shoes before she left. That way everyone in Ohio knew exactly who she belonged to. We don't want any confusion.

Huggy Bear thinks he's a good hider but as you could tell by yesterday's Wordless Wednesday he's not always hidden. It's hard when you're a big mancat and full of floof.

Also, Dad thought this YouTube video of Advanced Cat Yodeling was funnier than we did... (from the same guys who brought us the Engineers Guide to Cats.)
Posted by jenianddean at 12:01 AM