Mom has been uploading tons of pictures to our Flickr account to clear up space on her phone so she can take more pictures (surely of us, and not of those twins who come to visit). I like Flickr, but I noticed I think I have too many pictures in our Kittens folder because it's hard to sometimes find the new ones.* 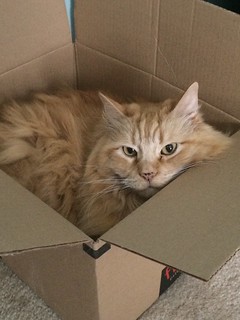 Here I am in a picture that Mom too of me in September. I'm pretty sure this is the same box that is in the bedroom. I have declared the box in the bedroom as "mine" and I will run and hop into it whenever another cat comes in to make sure no one else puts their stink on it (I'm talking to you, Maggie). Recently I heard Mom say something about how it will be a sad day when we have to get rid of my box. I'm not sure what she's talking about because that box isn't going anywhere.

*We noticed when Flickr did their upgrade to their site some of the folders of pictures seem disorganized. When you would think there would be some chronological order or some way to sort them other than manually reorganizing hundreds of pictures. Of course the photostream is still in chronological order, but it's challenging to wade through all those pictures. Time to rethink my folders.
Posted by Jasper McKitten-Cat at 12:24 PM

That box looks like a purrfect box , so I sure hope no one will take it away !

No getting rid of boxes - what is wrong with humans?!

Boxes should never be taken away. My favourite box is about 5 years old and I sleep in it a lot.


What a great box! We hope you get to keep it forever...or until it falls apart.

Awwwwww, dear Jasper what a sweet picture. You look so comfy in that box! We love boxes, too!

We would guard that box too.
It's too pawsome to throw away!
Purrs Georgia and Julie,
Treasure and JJ