Usually our outside visitors consist mainly of neighboring cats intruding on our deck, or maybe a sassy squirrel or two. But with Mom and Dad working in the yard so much the last three days they have seen a lot of other visitors, too.

They saw lots of lizards (or the same two lizards over and over again)... 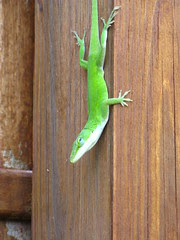 Huggy Bear really wanted to hunt this one. 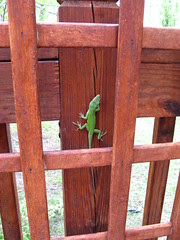 But he was really quick and a challenge to get a good picture of. 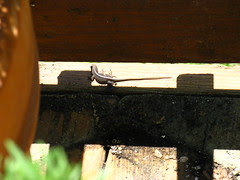 This was a tiny baby lizard. 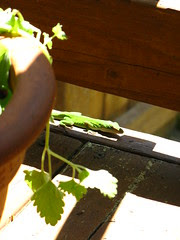 And what we assume is the momma lizard hanging out by the catnip plant. 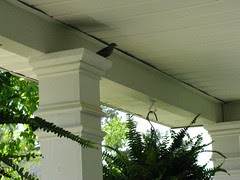 There was a birdy investigating the new hanging ferns on the front porch. I hope she doesn't try to build a nest in the ferns because it'll get all messed up when the plants get watered.

Then the weekend before last, there was this guy: 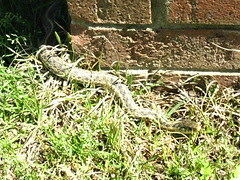 A rat snake was sunning against the house. Sure, he's non-venomous, essentially a large worm, and chased out of the woods behind the houses across the street by some construction, but still, it's a snake where Mom and Dad would rather not see snakes. Fortunately he wasn't back this weekend while Mom and Dad were doing so much or else this weekend wouldn't have been nearly as productive for them. On the other hand, we might have had more Mom and Dad time...
Posted by jenianddean at 12:08 AM