This weekend Mom was going through some of her collection of recipes from her favorite magazines. Instead of keeping a huge stack of magazines that are mostly ads anyway, Mom cuts out the pages she needs and organizes them into three-ring binders. Mom is going to be helping a friend with food for his birthday this Spring, and wanted to get some ideas. 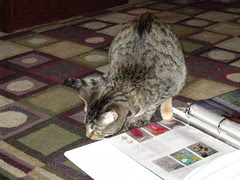 Maggie decided to help Mom choose some recipes. But then she decided to mark which ones she liked by putting the toothy death to them. And that's why she ended up in the air in yesterday's Wordless Wednesday picture.

But speaking of human food, here are thirteen of our favorite people foods to go after:
1. Chick-fil-A: Their slogan says Eat Mor Chikin, and I couldn't agree more. Usually Huggy Bear is very good about minding his manners when Mom and Dad are eating, but he goes a little nuts when the "Chick" is in the house.
2. Cheerios: Maggie love the honey of an O and tries to get Dad's cereal when he's eating breakfast. She even snuck and ate some of Mom's cereal when she turned away.
3. Cereal milk: The milk in the bottom of the bowl is so so good!
4. Pineapple syrup: You know the juice that the canned pineapple is in? That is the best thing ever!
5. Salt: I don't eat salt from the shaker, but I lick salty fingertips after Mom and Dad have chips.
6. Cheetos: OK, I'll he honest, I don't eat Cheetos much, but Fluffy who came before us, he was a big Cheetos fan, so it has to make the list in his honor.
7. Shrimp: Of course we like shrimp, but I think we like the thought of shrimp even more than the actual eating of the shrimp, especially Josie, who will beg and beg for shrimp, then snub it once Mom fixes her some.
8. Cheese: Huggy Bear will meez for cheese like nobody's business. I would swear he was part meezer if not for the fact that he's a big house panther. He likes Kraft cheese slices, and some of the soft cheese, like goat cheese and cream cheese.
9. Chicken: Now that's a no brainer. Mom will get the rotisserie chicken from Sam's when she needs some for a recipe quick. She gets what she needs, and then we get a treat from what's left.
10. Kaiser rolls: OK, we don't really eat rolls, but the other day Dad was eating some soup Mom had fixed and Maggie hopped up on the table, gave a sniff sniff, then licked his roll!
11. Bacon: Although we don't get it often, bacon is very good. Maybe it's better because we don't get it too often.
12. Yogurt: A while back Mom and Dad had picked up some yogurt at the store and HB would lick the container after they were done. He really seemed to like it, or at least like the challenge of licking it.
13. Ice: So maybe ice really isn't a "food" but it is one of our favorite things that comes from the fridge. It's especially fun to bat around the kitchen floor, then to leave where it will make a puddle for Mom to step in.

And just a note: We are very excited about Secret Paws!
Posted by jenianddean at 12:02 AM