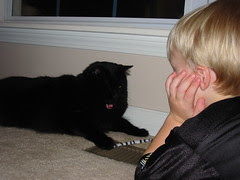 So whatcha thinking about Huggy Bear?
Originally uploaded by jenianddean

We had company for Thanksgiving. Mom and Dad's friends Tracey and Clay flew in from Iowa and brought their two-and-a-half-year-old son Garrett with them. Garrett was fascinated with us, but Huggy Bear (Huddy Bear to Garrett, whose nose was stuffed up) was the one who was Mancat enough to dare to be near Garrett. Maybe it was because HB weighed the draw of the turkey scent over the fear of sticky fingers, maybe he was drawn in by someone who wanted to play feathers-on-a-stick with him, but by the end of the weekend Garrett was sitting in Dad's lap watching Conjunction Junction over and over again (he liked trains a lot) and HB was laying pressed up against Dad's leg letting Garrett gently pat him. Although we were a little out of sorts with the little guy around, it's only been a day and we miss him already. 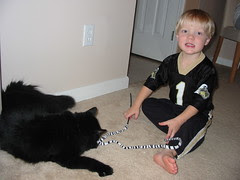 Posted by jenianddean at 9:34 AM