We were tagged by Kashim and Othello and Patches and Mittens of the Big Piney Woods with the desktop meme... (they both have really nice desktops worth looking at). 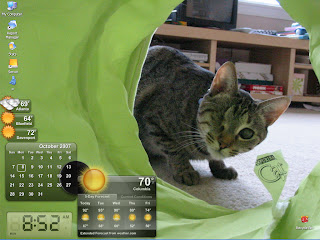 This is Dad's desktop at work. He has Maggie's tunnel picture on it right now because he likes how the green tunnel creates an area for the icons to sit. He also has the Yahoo! Widgets in the lower left corner (needs to straighten the calendar since it changed to October and is smaller than September). (This used to be called Konfabulator before Yahoo! bought it, as they battle Google to see who can buy up most of the internet. I think Konfabulator is a much more fun name than Yahoo! Widgets.) Dad has also used icons from the Icon Factory to spruce up his desktop icons. (Although with Halloween coming up, he may switch to this wallpaper from the Icon Factory.) 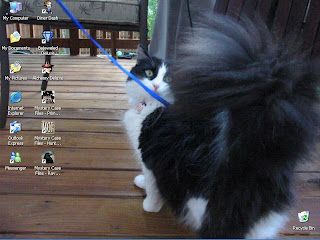 This is the desktop at home that I do my blogging from. Right now it has a picture of Josie with her plume tail from the afternoon that Mom and Dad put her on the harness and took her on the deck. We have two rows of shortcuts on the desktop at home, the left is the standard icons (except we use Firefox now instead of IE, even though we've left that icon up) and the right row is Mom's games she likes. She's been playing a lot of hidden object games (Mystery Case Files), along with the classic Bejeweled, Alchemy and Diner Dash. Dad likes to put the trash in the bottom right corner (and old Apple holdover, plus who wants your trash with all your good stuff?).

I know I'm supposed to tag a handful of other bloggers (and this is where I stink at memes) but I'm usually behind on these, so please tag yourself and comment that you posted one if you want to play along but haven't been tagged. Consider this an open invitation to play tag.
Posted by jenianddean at 9:09 PM