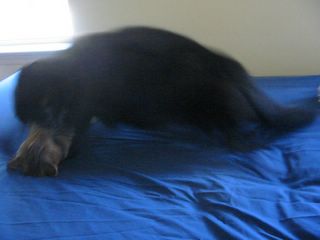 Dad found the "burst mode" on the camera which allows you to take several pictures quickly. Without the flash, you end up with what almost looks like stop-action or slow-motion film if you flip through them quickly. Dad did this with a wrestling match between Huggy Bear and Maggie. (Don't feel bad for her, she eggs him on.) There are some really neat sequences, but for a single shot, this is our favorite. We lost some details, but there's such motion and you can really see how fluid Huggy Bear is in his pounce, even for a little chunk like him. (OK, don't tell him I called him a chunk because we usually play nice and I don't feel like getting the pounce right now.)