Aslan had a very busy Tuesday! He loves to fetch things for Mom and Dad. One of his favorite games is "foil ball" where Mom and Dad will make a ball out of Hershey Kisses wrappers and throw it for him. He will either bat it out of the air, or go chasing after it and return it to Mom or Dad for them to throw it again. 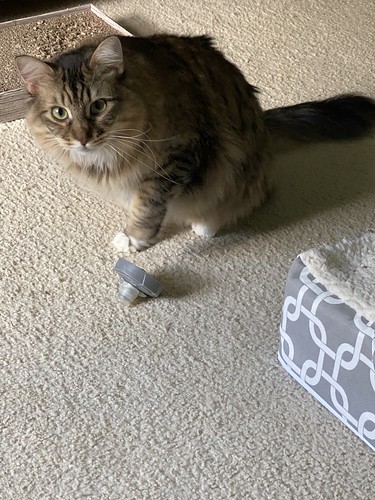 Tuesday, he decided to fetch some things from the kitchen. This is the lid to Mom's water bottle for the exercise bike. It was on the kitchen counter.

But the one that got him was when he brought Mom a jalapeno from the counter. Mom thought he was bringing her a bug (it's happened before), but then she realized it was a hot pepper. Poor little guy was panting and uncomfortable. Mom noticed a few teeth marks in the pepper from where he carried it, and got him some milk to neutralize the heat. He was OK, but I think he learned a lesson too.
Posted by Jasper McKitten-Cat at 4:13 PM

Poor boy, he literally bit off more than he could chew! I am glad he was okay.
Eric loved to retrieve rolled up foil balls too. He would bring them back and drop them in our hands and wait for them to be thrown again.

Poor Aslan! I hope he remembers that lesson!

Our Angel used to chase and bring back foil balls. She and I would play fetch up and down the stairs.
I once rubbed my eyes after cutting up spicy peppers...The Hubby almost rushed me to emergency, but the burned died down after a little while.
Won't do that again!

Poor Aslan! Good thing your mum was quick with the cure ;)
Purrs,Georgia and Julie