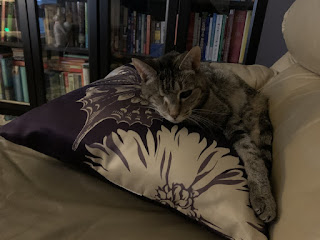 I found a new place to hang out, lounging on this great IKEA pillow on the couch in the front parlor where the morning sun washes over me. It's super comfy.
So Aslan has a new thing he's started doing (and I hope he doesn't stop now that I'm talking about it). Aslan doesn't like top nap at Kitty Cat Nap Time when Loki and I are napping. So a few times last week he went up to Mom and pat-patted her on the leg to get her attention and then curled up in her arms so she could hold him like a a baby. The first day he let her hold him for about 20 minutes and about 10 the second day. It really was the sweetest thing.
Posted by Jasper McKitten-Cat at 2:05 PM

That looks like a pawsome hanging out spot Maggie.
Nice and cozy and yours:)
Humans often get excited when we cats cuddle with them
and let them hold us.
Julie is the big snuggler here and we are happy that Aslan is making your mum happy :)
Purrs,Georgia and Julie

Thanks for sharing the cute photo. That looks like such a wonderfully comfy pillow there. We love hearing about Aslan being such a sweetheart with mum. Have a wonderful rest of your day.
World of Animals

That pillow looks like a very comfortable bed for you, Maggie. It is sweet of Aslan to go for cuddles in your mum's arms.

That is so sweet.

What a sweet habit.

We would go crazy if a kitty wanted to stay craddled in our arms!