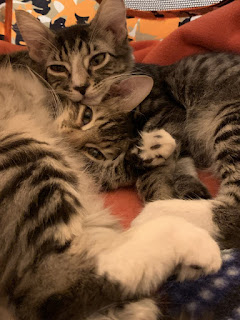 Tonight I had another trial encounter with The Intruders. Mom and Dad put blankets around all the dressers, night stands, and the bed so the kittens couldn't get under anything in the master bedroom and hide. Then they brought me up to the bedroom and opened the bathroom door so the kittens could explore. I was at the doorway and have a hiss and aggressive growl at Aslan who quickly retreated to his tent. I went into the walk-in closet and curled up on the blanket Dad had put in there for me. Dad fixed me some Purely Fancy Feast (they used to be called Appetizers). I only drink the broth but I really like it.
Well the boys eventually ventured out of the bathroom and started exploring the bedroom. Dad lost track of Loki and they realized he had come into the closet with me. (Mom and Dad were trying to give me my space but decided to see what happened.) A gave a low growl and a slight hiss but allowed them to explore. Aslan came in and worked his way over to my leftover food (the shredded chicken) and helped himself. I hissed and growled low but not too aggressively and let him eat.
It was a promising start. The boys explored the room some more, got a little nipped up from my scratcher, then went back to their bathroom. I napped in the closet for a little bit then went back downstairs to the exact opposite side of the house from the kittens. We'll try again tomorrow, little by little, but at least it gives Mom and Dad some hope that I'll accept them.
Posted by Jasper McKitten-Cat at 12:22 AM

I think this is a really promising start, and your humans are doing a good job of introducing you all slowly.

You are doing well! it is good that there are two of them so they can play together instead of annoying you all the time.

Yes, this seems like a positive start!
Now I want some kittens too...

It sounds like you're doing just fine, Maggie. You have to let them know what's what early on or you wind up with two pests like I have.

Just take it slow, Maggie...and make sure you let them know that you’re the boss. :0

It's good to take it slow.
You don't want to rush into anything ;)
Purrs,Georgia,Julie and JJ