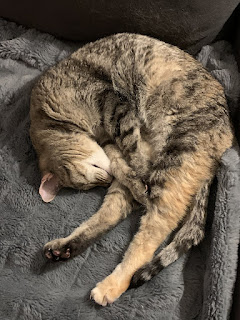 I've done my share of hunting. As the senior cat in the house I get to rest like this while the boys are now in charge of hunting bugs. The reality of living in South Carolina is sometimes there will be a bug in the house.
The other day we had an ant invasion — those tiny annoying sugar ants. It happens once a year usually in the spring when it's been dry. The ants had found a wayward treat in the pantry that the kittens must have knocked under the door. Loki showed Mom the ants. He's the first McKitten-Cat to ever give an ant any notice. But he hunted them like an aardvark and snoopervised Mom's cleanup.
Now Aslan likes to play ball. I've mentioned before how he'll hunt a foil ball and play fetch. He had been doing that one night until the ball vanished. So later Dad was asleep and Mom was up watching TV because she can't sleep. Well Aslan came up and dropped something in Mom's hand. She was expecting the ball, not a roach. She threw it on Dad, screaming "there's a roach in the bed!" Dad hopped up and finished the "hunt" for Aslan. Then Aslan got a treat for being a good hunter.
(OK, this makes us sound dirty. Our house is clean. These are rare instances but it unfortunately is what sometimes happens in the South.)
Posted by Jasper McKitten-Cat at 9:55 PM

What a fun household you live in! MOL

Aslan is a good hunter! A roach in the bed is not as bad as getting out in the middle of the night and stepping on a half eaten mouse!
We had two ant nests near our front door and a few had started to come in. I put ant bait traps down outdoors and now there is no sign of them. I am sure there will be more nests as the weather gets warmer though, but I have more traps ready for them!

Yeah, the roach thing happens here in Wilmington, too. Two nights in a row this past week dad woke up in the middle of the night to find a large, struggling-on-its-back roach in the hallway. We keep our place real clean, but unfortunately we're surrounded by other apartment dwellers who may not be so fastidious about their housekeeping.

We bet it’s fun watching those youngsters and all the trouble they get into.

Yikes! We have not seen a roach before...darn!
Mum says we are just lucky. We say ???
We do get the ants though. We live way up in Nova Scotia.
Purrs,Georgia and Julie

Da Boyz like to hunt moths and spiders, but I just found the corpse of a centipede on the floor...?!?
Our house is over 100 years old, so there are no doubt some cracks that creepy crawlies can get in through.

OMC! Your mom's reaction *was* pretty funny. We know roaches are equal opportunity invaders--we have them here too. Our city even had a roach hotline (don't know if there still is one), so that should give you an idea. Thankfully, we get them inside only once in a while, so we make do with spiders and moths.

We are not interested in ants, but they send our mom into orbit. Last year we--and other buildings around ours--had a major invasion that lasted months. Mom was seriously not amused with the Million Ant March to our food dish--that time they were coming out of the stairwell.